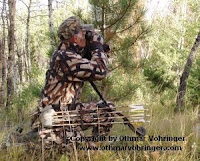 When the rut is over and the guns have fallen silent most hunters hang up their guns and bows until next year. The common opinion is that the post rut doesn’t yield any big bucks because they have been killed during the firearm season. Nothing could be further from the truth. Hunters that brave the cold and take advantage of the late bowhunting season offered in may states and Canadian provinces may yet have the best chance of killing a big buck.

Lets look at the facts of why I think that the late season might yet be the best time for you to go after a mature buck. During the rut bucks travel day and night in search of hot does. It is next to impossible to predict where and when a buck will show himself. Sure the hunter who sticks with the does and sets up stands in likely buck travel corridors, with a helping of luck added, will occasionally have a buck appear near his stand site. Most of these will be young bucks. The mature bucks, those that survived several hunting seasons, often avoid travelling during daylight hours. We refer to these deer as “nocturnal” bucks.

After the rut winds down the joke in on the bucks. Having lost almost a quarter of their body weight and with most of the food depleted a buck’s primary concern is now to eat and sleep in order to regain the lost weight. If the buck fails to regain his weight it is unlikely that he will survive the long cold winter.

Picked corn and bean fields are revisited again where bucks dig with their front hoofs for the last remaining morsels of nutritious corn and beans. Oak trees, wild rose bushes, honeysuckle and winter farm crops are now the main staple foods for the bucks. Often the bucks will choose a bedding area that provides ample cover and shelter close by. The buck that had traveled many miles during the rut in search of receptive does is now confined to a very small territory. How large that territory is depends on the availability of cover and food. The territory can be a square mile or two square miles. The closer food and cover are together the better the buck likes it. In any case buck travel patterns at this time of year become very predictable.

As an additional bonus, in the late season the avid hunter will have the woods mostly all to himself. Once the woods turn back to normal deer begin to relax within a week or two after the gun season closes. In other words, deer will behave more natural again without looking over the shoulder every time they hear something. Bucks will travel more during daytime hours, using the warmer time of the day to conserve energy and rest at night. This is especially the case where temperatures fall into the subzero at night.


There are several tactics that you can employ in the post-rut and late season. I have found that placing a stand somewhere, where that is needs to be established through scouting, along the bed to food corridor can pay off big time.
Right after the rut and the beginning of the post-rut, when bucks are still nocturnal, it is best to set up the stand near his bedding area. Usually bucks leave their beds before nightfall and the closer you’re to his bedding area the better the chances are to catch him out and about. One caution though. If you go close to the bucks bed make absolutely sure you’re not disturbing the buck or let the buck in any other way clue in to your presence. He will be gone in a flash and finding him again will be at best difficult.

Ones you selected a stand site prepare to stay all day. The buck you’re after may come by you at any time of the day. I know form experience that it can become quickly a battle of endurance to sit all day in a stand, especially in the later part of the season when it is freezing cold and the north winds blow hard. If it gets really cold or when the there is fresh snow on the ground I like to walk in search of a big buck.

There is nothing like tracking a big buck down after a fresh snowfall. Walk slowly and stop often to survey the area ahead of you and behind you. Big bucks are known to backtrack in a big circle if they feel that they are followed. During the midday hours and when the sun is out walk along south facing slopes. Bucks often bed down in the wide open on south facing slopes and let the sun warm their body. On windy cold days search along wind sheltered overgrown ravines and gullies for a buck.

There is no reason for a hunter to stay home after the gun season. Especially not if you still have a tag to fill. The season is not over until it is over.

Great post, and ideal timing. Unfortunately I was unable to tag a big buck during modern gun season, but we're in the midst of muzzleloader season here in Kentucky. If we can't bag on this week, we'll be looking more towards these tactics for the remainder of bow season.

Not a lot of southern facing slopes, but we'll definitely hit those that we do have.

Still others enjoy the unpredictable excitement of peak rut, when mature bucks let their guard down and wander around in the full light of day; and they'll come to the sound of rattling with fire in their eyes. Only a select few, it seems, put the post-rut at the top of their list. While it may not be as glamorous, there are some good reasons why post-rut can be a very good time to bag a big buck.
Bowtrol Colon Review

You have a lot of very good information, I'll be checking in from time to time.

hey i know this sounds stupid but im a begining hunter how can you tell if there is a buck bedding area?