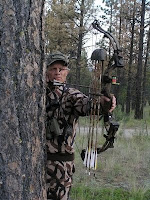 Here is a question that I get quite often asked from hunters. ‘What are the best calls and scents to use in the early deer hunting season?”

Let me begin by saying that the solid foundation of all hunting success is smart scouting and stand placement according the scouting results. All the tactics, what ever they may be, you use will do nothing for you without scouting first.

It always has been my opinion that the early season is without a doubt the toughest time to kill a mature buck, if that’s what you’re after. I have however, arrowed many deer in the early archery season. All of them were does and small bucks. This is not to say that it is impossible to kill large bucks too. One look in the trophy books will prove that a fair number of record bucks are taken in the early season.

The reasons the early season is so hard on deer hunters bent on shooting a large buck are that the odds are overwhelmingly in the favor of the deer. For starters, the vegetation is still thick, providing plenty of cover for deer to travel. Food is available practically everywhere right in front of a deers nose and the still warm daytime temperatures causes deer, especially the big bucks, to travel predominantly before and after legal shooting light.

This brings me to the original question of what calls and scent to use in the early season. Personally I am not big on using calls and scent in the early season at all. The bucks at this time of year still travel in bachelor groups and still have their antlers in velvet. This means rattling antlers and other buck calls that can attract bucks during any other time of the season are out of question.

If I would use a call in the early season it would be no more than a few friendly social deer grunts, and only if I see a deer and only if the deer is out of shooting range. So what about deer scent then? Well, in my experience it’s very much the same deal as with calling. The rut is still far off in the future. This makes the use of doe-in-heat or buck-in-rut scent pretty much useless. In fact if you were to use these scents you would likely scare deer away because it is not natural for that time of year. That basically leaves me with only one choice, which is to use regular doe or buck urine.

But what about food based scents. Will they work? To be truthful with you I have never seen much sense I using food based attractant scents at any time during the hunting season. If I am hunting near a cornfield then the air is saturated with corn scent. If I am in an apple orchard the air is saturated with apple scent. So what’s the point in adding more of the same scent? If my stand were located away from cornfield or apple orchard it would be pointless to use corn or apple scent in fact by using such scent I would let the deer know that something is not right here.

Deer are intricately familiar with their surrounding. In other words deer know exactly what food grows where and at what time of year it is available to them. Trying to bluff a deer into thinking that a particular food is available when it is not is a sure recipe of raising a red flag.

Because of all these limitations I do not use any scent in the early season and only call when I see a deer in the distance in the hope to coax it within shooting distance of my stand. Sometimes this works and most times deer blissfully ignore it.

Conclusion: While the right scent at the right time and palce or, and calling used cautiously can work sometimes it is not something I would consider using in the early season. Proper scouting and keeping taps on deer movement patterns and placing stands accordingly are a much better guarantee to get close to an early season buck.

Other related articles to this topic you may find of interest:
Deer scent and calling tactics through the seasons
Making sense about deer scent
Outdoors with Othmar Vohringer
A year in a whitetail deer’s live

Calls I like to use but have to be honest that I don't use scents all that much.
This was a very good post.

I love calling, to me there is no greater satisfaction than calling a deer, turkey, duck or coyote into my setup. I use scent only during the rut and sometimes when I hunt coyotes. Scent can work very well if applied at the right time and in moderation.
-ov-

One type of scent I feel was overlooked is curiosity scents. I always place a wick or two of trails end 307 about 20 yards from my stands. Deer stop In their tracks to check it out presenting a perfect shot. Otherwise it's a great article. -JB-

Thanks. I hope you have a great hunt. Appologies for removing your link, but it did not work.

Hi friend,
When hunting I usually use turnip and chicory to attract the deer.