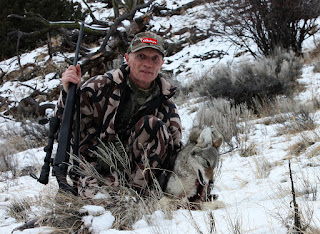 The hunting season of 2016 is history here in British Columbia and with that most hunters put their hunting equipment away for the winter. However, there is a hunting season that is still open (in some Wildlife Management Units until June 30th and in others until March 31st). I am talking about coyote hunting. There are several benefits hunting coyotes. In most areas coyotes are grossly overpopulated to the point were they have become a nuisance and a danger to pets, livestock and wildlife populations. In a few rarer cases they pose a danger even to humans. It is estimated that coyotes can kill as much as 56 percent of the deer fawns born in the spring, but they also can create havoc on grouse and other wildlife populations. With that said it makes good conservation sense to hunt coyotes after the regular hunting season closes.

Another benefit of hunting coyotes is that the fur prices have increased over the past two to three years. A prime coyote pelt can fetch upwards of 68 dollars for a Western coyote and 40 dollars for lesser quality and Eastern coyote. In other words, by hunting coyotes all winter you could substantially support your hunting budget. But before you can think about selling fur to finance your next hunting rifle or a few boxes of ammunition there are some vital aspects of coyote hunting to consider.

One of these considerations is the firearm caliber you should choose. If you hunt coyotes for fur the deer rifle will render the fur useless. Typically coyote rifle calibers are small to prevent damage to the pelt but with enough power to dispatch the animal humanly. The generally accepted calibers are as follows. On the lowest end of the scale is the .17 HMR. This caliber has an extremely flat trajectory but lacks the punch needed for long range shooting (beyond 100 yards). In the middle of the scale are the .204 Ruger, the .223 Remington (my favourite), the 220 Swift and .243 Winchester. So called “coyote loads” of these calibers with soft-tip bullets in the 55 to 60 grain weight generate enough energy and punch out to 200 yards to kill a coyote instantly with minimal fur damage. On the upper end of the scale would be the .22-250 Remington- a potent caliber for coyotes out to 300 yards. However, the loads used in this caliber would not necessarily be my choice for getting prime coyote fur as the bullets often make quite large exit holes, meaning fur damage.

Hunting tactics for coyotes are different from deer hunting tactics. If you think that deer are wary critters think again. Part of why coyote populations reached such high numbers is because they are extremely cautious critters. Most times when you see them is when they run away from you. Because of this wariness they can’t be hunted by stalking up to them or driving along logging roads. Coyotes are most successfully hunted by setting up on a location where you have a good view of the surrounding landscape yet be camouflaged enough that approaching coyotes can’t spot you from a long distance away. Once set up, coyotes are called into shooting range by imitating coyote welcoming howls and distress calls of injured prey animals such as rabbits, fawns and birds. Other good calls to use are magpie and raven calls since coyotes follow these “air surveillance agents” around to find an injured or diseased animal. It is legal here in British Columbia to use electronic coyote calls that come pre-programmed with a variety of sounds that will get the interest of a coyote. In addition to calling, the most successful coyote hunters use a decoy to provide visual stimuli, and for good reason. As I said above, coyotes are very wary animals. If they come to a call they tend to hang up a long way out to survey the area for the easy meal whose cries they heard. If they can’t see anything they often leave but by using a decoy – this can be something as simple as a strip of fur over the ground moving with the wind – you will add to the realism and convince the coyote to come closer.

If you never hunted coyotes there are many good sources on the internet that provide all sorts of valued information for the beginning coyote hunters, including how to prepare and care for the pelt in order to gain a good selling price.

Posted by Othmar Vohringer at 8:03 PM

Why Coyote Hunting may actually be Good for Deer Conservation

As the weather conditions get colder, the deer hunting season is ending. However, hunting does not have to stop there. Snow and cold weather conditions may still be ideal for hunting of a different kind of animal: the coyote. According to the Wildlife Management unit, the season may continue until latest June 30. An overpopulation of coyotes not only pose as a nuisance, but a threat as well to the general population, as they hunt for other animals, such as pets. However, do take note that hunting for coyotes are different from deer hunting, from tactics to calls to firearms. Some more education and expenses, especially for calibers, is necessary for one to embark on this new kind of hunt.